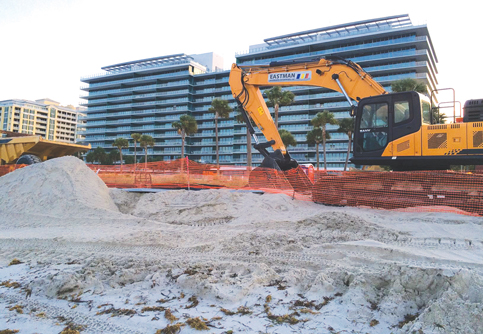 The effort is part of a decades-old program to resurface eroded beaches along the county’s coastline. But unlike prior iterations of the program, these and many future sanding projects will be fully paid for by the federal government, a report from Miami-Dade Mayor Daniella Levine Cava’s office said.

Already this year, the Army Corps hauled 635,000 cubic yards of sand from upland mines near Okeechobee and Clewiston to mend eroded beaches on Surfside and Miami Beach.

The Corps’ biggest beach renourishment undertaking here this year is scheduled to begin one month later, when the engineering formation plans to truck 830,000 cubic yards of sand – more than 1 million tons – to eroded shores across Miami Beach.

Funding for the projects comes through the Bipartisan Budget Act, which Congress passed in February 2018 and in part authorizes beach re-sanding and hurricane protections in Miami-Dade, with total expenditures up to $158.3 million covered by the federal government.

Under that arrangement, which Miami-Dade commissioners approved in January 2019, the Army Corps planned five program phases.

At the same time, the Corps is evaluating a beach segment from Government Cut to Baker’s Haulover Inlet and will provide an updated cost-share estimate between the federal government and Miami-Dade for the program through about 2072.

The study, which also includes an examination of Key Biscayne, is expected to finish in October 2022.

The Miami-Dade Beach Erosion Control and Hurricane Surge Protection Program began after Congress authorized it in 1966 to address severe beach depletion and the associated economic and social impacts here.

The resulting work that the Army Corps developed and undertook called for building a 10.5-mile protective beach fill extending from Government Cut to Haulover Beach Park.

That project was done through six contracts from 1975 to 1982 using offshore sand. In 1986, Congress OK’d a second phase of the project for a 2.5-mile segment stretching north between Sunny Isles Beach and Golden Beach, which ended two years later.

The Corps identified seven “erosional hotspots,” according to a master plan of the program by the county. They include the north end of Sunny Isles Beach, Bal Harbour Beach, an area north of Government Cut and 63rd, 55th, 44th and 32nd streets on Miami Beach.

Renourishment efforts now exclusively use domestically derived sand despite its near-prohibitive cost. In 2007, former county Commissioner Bruno Barreiro unsuccessfully lobbied Washington for permission to use foreign sand. Sand was since shipped from the Bahamas and hauled from Central Florida and St. Lucie County.

But that method was inefficient, produced inconsistent beach areas due to differences in sand quality, and it bothered residents of areas where the sand came from, Lee Hefty, who leads the county’s Division of Environmental Resources Management (DERM), told Miami Today in 2018.

Through 2006, when the county published its most recent master plan for beach erosion control, some 18 million cubic yards of sand – 22.5 million tons – were excavated and transplanted from state-sourced and offshore sites since the program began in 1975.

Commissioner Sally Heyman, whose district includes many miles of beaches, has called renourishment projects “the front-line of climate change and sea level rise.”

In 2018, a private developer of the Residences by Armani Casa in Sunny Isles Beach hauled and renourished 3,000 feet of shoreline with 29,400 cubic yards of beach-quality sand from the Vulcan Witherspoon Mine in Moore Haven. The state division of DERM “closely monitored the work,” Ms. Levine Cava’s report said.

And in January 2020, the developer of the Estates of Acqualina in Sunny Isles had nearly 24,900 cubic yards of sand hauled from an upland mine and placed it along beaches between 186th and 195th streets, with Miami-Dade DERM overseeing the work.