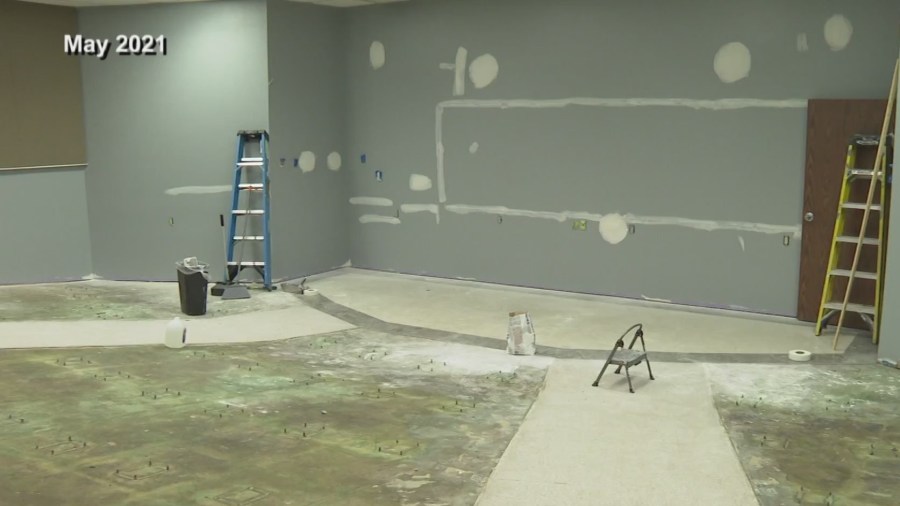 ROUND ROCK, Texas (KXAN) — Some schools across Central Texas are still struggling to make repairs on damages resulting from the winter storms.

In February, KXAN cameras went inside Deerpark Middle School, a campus in the Round Rock Independent School District. Principal Jonathan Smith provided a full tour of the campus, revealing the destruction that came from exploding sprinkler pipes.

Ever since that story aired, Smith said support has been flooding in.

Truthfully, the school and staff have needed all the help they can get. A large portion of the campus is still under major renovations.

The gymnasium has been completely gutted after water seeped below the basketball court floorboards. Teachers and administrators are sharing space together in the library. Even Principal Smith has made an office out of a broom closet.

“We’ve definitely gotten better day-by-day. Working together as a team, sacrificing for one another, but more importantly, sacrificing for the children,” Smith said. “It really brought us together.”

Smith said the Parents Teachers Association has rallied by their side, starting food drives and providing canned goods to teachers. Most recently, the Mosaic church made a major donation.

Rosalynn Smith, the church’s Pastor of Mission and Adult Education, said the congregation watched the KXAN news report which showed the destruction of the Deerpark campus. She said it sparked action, with people from all over wanting to help contribute financially.

On Thursday, Pastor Smith presented 100 $100 gift cards to Principal Smith to be delivered to every single staff member at the school. That means not just the teachers, but the coaches, cafeteria workers and other employees, too. The total value of the donation equaled $10,000.

“How can we help? We can’t be there to change anything. We can’t fix the pipes, but we just want to give. So they just gave so they could help in some type of way,” Pastor Smith said. “We want to be a part of giving back to the community and helping in such devastation.”

In a cellphone video taken during the donation, Principal Smith was visibly shocked when receiving the gift; it was a complete surprise to him and his staff. He tearfully thanked Pastor Smith.

“We have no idea what the fall is going to look like, but we are going to go into it together. And knowing that our community has been there for us and is going to be there for us is just another reason why we rise,” Smith said.

The Hays Consolidated Independent School District finished emergency repairs to get through the remainder of the school year. But the district will need to use the summer to make more permanent fixes.

In the Leander ISD, insurance was needed to make repairs. But some lingering issues still exist. Two elementary schools are still under partial construction, and the water fountains at some sports stadiums will need to be replaced.

Reach KXAN’s Education Reporter Alex Caprariello by email at alexc@kxan.com or by phone at 512-703-5365, or find him on Twitter and Facebook.