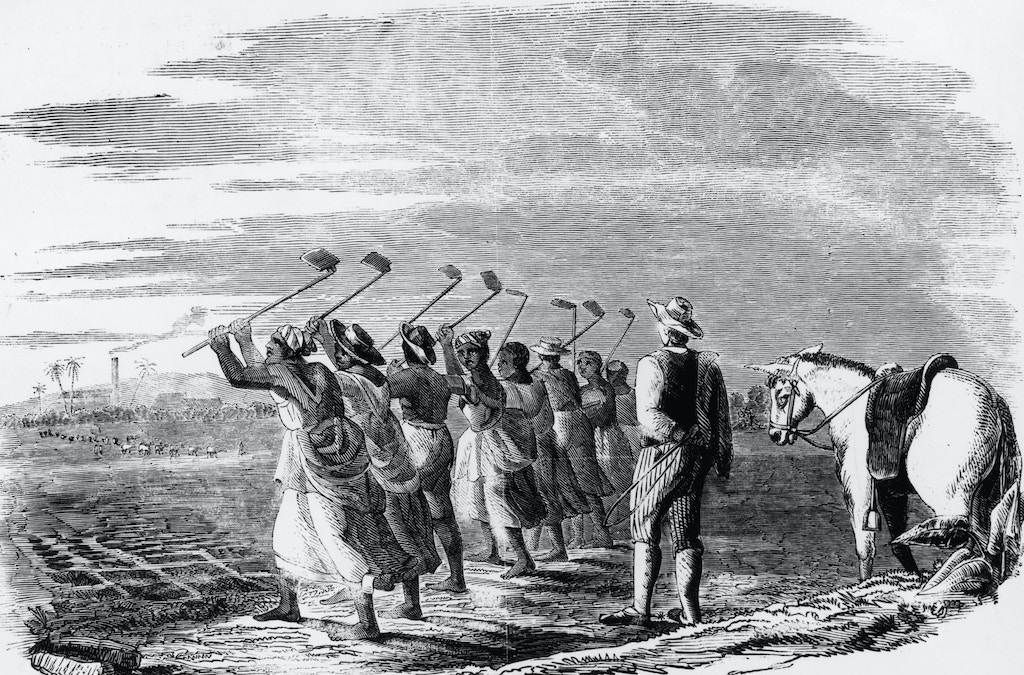 Recently “freed” workers on a sugar plantation in the West Indies in 1849. Their progress is watched by a white supervisor with a whip.

The current blizzard of stories about a “worker shortage” across the U.S. may seem as though it’s about this peculiar moment, as the pandemic fades. Restaurants in Washington, D.C., contend that they’re suffering from a staffing “crisis.” The hospitality industry in Massachusetts says it’s experiencing the same disaster. The governor of Montana plans to cancel coronavirus-related additional unemployment benefits funded by the federal government, and the cries of business owners are being heard in the White House.

In reality, though, this should be understood as the latest iteration of a question that’s plagued the owning class for centuries: How can they get everyone to do awful jobs for them for awful pay?

Employers’ anxiety about this can be measured by the fact that these stories have erupted when there currently is no shortage of workers. An actual shortage would result in wages rising at the bottom of the income distribution to such a degree that there was notable inflation. That’s not happening, at least not now. Instead, business owners seem to mean that they can’t find people who’ll work for what the owners want to pay them. This is a “shortage” in the same sense that there is a shortage of new Lamborghinis available for $1,000.

To understand what’s truly going on, it’s necessary to look back at how this question has been settled in different ways through the history of capitalism.

As Europe colonized the Western Hemisphere, the initial solution was simple: slavery. It began with the enslavement of Indigenous people from Canada to Cape Horn. This happened on a larger scale than is generally understood today, with one estimate finding that between 2 and 5.5 million Indigenous people were subject to slavery throughout the Americas.

Enslaving Indigenous populations did not go as well as Europeans hoped, however. If they were forced into bondage near where they’d previously lived, Indigenous people understood the land and could easily escape back to their tribe. (This problem was sometimes addressed by shipping them far away, often to the West Indies to work on extraordinarily brutal sugar plantations.) Britain and France, battling for supremacy in North America, were loath to alienate Indigenous people who might then ally with their rival. And Europeans and their diseases killed so many Indigenous people that often there simply weren’t enough around left to enslave.

This was the first worker shortage. It contributed to the expansion of the African slave trade, which, over 350 years, caused the kidnapping of approximately 12.5 million people, with perhaps 2 million dying on the way to the so-called New World.

But what were employers going to do when it was no longer possible to directly force people to labor? This was the subject of startlingly frank planning in British colonies after the passage of the Slavery Abolition Act of 1833.

In 1836, Lord Glenelg, the British secretary of state for war and the colonies, sent a dispatch to all the governors of the West Indies. Formerly enslaved people were about to be fully emancipated after serving a required period of “apprenticeship” for their former masters. This, Glenelg wrote, was going to cause problems for plantations:

During slavery, labour could be compelled to go wherever it promised most profit to the employer. Under the new system it will go wherever it promises most profit to the labourer. If, therefore, we are to keep up the cultivation of the staple productions, we must make it in the immediate and apparent interest of the negro population to employ their labour in raising them. … Where there is land enough to yield an abundant subsistence to the whole population in return for slight labour, they will probably have no sufficient inducement to prefer the more toilsome existence of a regular labourer.

Obviously the answer couldn’t be paying laborers more. Instead, Glenelg explained, it would be necessary to prevent the former slaves from obtaining any land they could work themselves by fixing “such a price upon Crown lands as may place them out of reach of persons without capital.”

In a then-famous speech, a member of Parliament named William Molesworth said it as straightforwardly as possible: “The danger is, that the whole of the labouring population of the West Indies should, as soon as they become entirely free, refuse to work for wages … and that thus capitalists should be left without labourers.”

Several years later, the Scottish polemicist Thomas Carlyle jumped into the fray, in an article with the viciously racist title you might assume. With a few changes, the substance of its argument could appear in National Review today:

The West Indies, it appears, are short of labour. … Where a Black man, by working about half-an-hour a-day … can supply himself, aid of sun and soil, with as much pumpkin as will suffice, he is likely to be a little stiff to raise into hard work! … Sunk to the ears in pumpkin, imbibing saccharine juices, and much at ease in his creation, he can listen to the less fortunate white man’s “demand,” and take his own time in supplying it. Higher wages, massa; higher, for your cane crop cannot wait; — still higher, til no conceivable opulence of cane crop will cover such wages.

Glenelg’s recommendations were largely enacted. This, together with the importation of indentured servants from India, saved plantation owners from experiencing the feared worker shortage.

The same dynamics played out in various permutations as the Industrial Revolution developed. In the U.S., slavery formally ended but was mostly restituted as sharecropping for almost 100 years. At home, the British government passed a series of enclosure laws, which privatized “common” lands on which landless peasants had farmed. Now unable to survive in the countryside, these tenants moved to cities, where their desperation prevented new factories from experiencing a worker shortage.

Many European countries instituted unemployment insurance programs in the early 20th century over the ferocious objections of the business world, which opposed them for obvious reasons: They allowed workers to eke out a bare-minimum survival without jobs. This changed the power equation between employers and employees, forcing businesses to raise wages and improve working conditions.

Despite large-scale working-class agitation in America, the U.S. federal government did not institute unemployment insurance for decades.

Despite large-scale working-class agitation in America, the U.S. federal government, even more dominated by business than the governments of Europe, did not institute unemployment insurance for decades. In 1922, the National Association of Manufacturers made a straightforward pronouncement: “Unemployment insurance” — of any kind — “is economically unsound.” Later, an NAM representative informed Congress that its plan for unemployment insurance was unconstitutional and also wouldn’t work. The media of the time was as solicitous then as it is now of the perspective of employers. One supporter of unemployment insurance testified in congressional hearings during the Great Depression that the idea was enormously popular but lamented that even “with all this mass support, it is extremely difficult to get any mention of this in the public press.”

Unemployment insurance finally was created as part of the Social Security Act of 1935. With that battle lost, business turned to a two-fold strategy: first, lobbying to keep unemployment benefits at the lowest level possible, and second, preventing the unemployment rate from ever getting too low. It may seem counterintuitive that businesses would not want the economy operating at full capacity. But low unemployment alters the balance of power between owners and workers just as unemployment insurance does — and when workers can easily quit and get another job across the street, the dreaded worker shortage simply appears again in a different guise.

The battle against low unemployment was eventually cloaked in scientific jargon. In 1975, two economists announced the existence of the non-accelerating inflation fate of unemployment, or NAIRU. If unemployment fell below NAIRU, inflation would start rising uncontrollably as businesses were forced to pay workers more and more. At the time, NAIRU was purportedly 5.5 percent, while later estimates placed it somewhat higher. This meant that whenever unemployment was getting too low, the Federal Reserve had to step in and strangle the economy until lots of people were thrown out of work.

The problem with NAIRU was that, while there is presumably some level of unemployment so low that it will lead to inflation, the official estimates were clearly far too high. The unemployment rate dropped to 3.8 percent in 2000 and dipped to 3.5 percent at the start of 2020, with no accelerating inflation in sight.

Today, with the additional unemployment benefits from the recent Covid-19 relief bill, business owners are living their greatest nightmare: workers with genuine leverage over their wages and working conditions. The owner of a Florida seafood restaurant recently explained this straightforwardly: “You need to have incentives to get people to work, not to stay home. You’ve got the hard workers who want to have a job, but the others need that motivation.”

In theory, there are many possible such incentives: better pay, better working conditions, even a slice of ownership of the company. But the owning class hasn’t been interested in those incentives at any point in the last few centuries. There’s only one incentive that makes sense to them: You work or you starve.