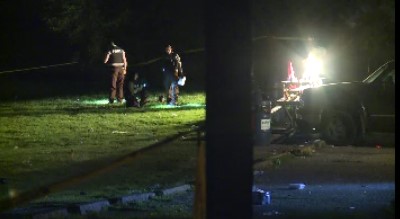 KINLOCH, Mo– The St. Louis County Police Department is investigating a double homicide after a shooting in the area of Mable and Suburban in Kinloch, Mo at a County park here Friday evening.

Three other male victims have what police are calling non life-threatening injuries.

A party involving at least 20 people was interrupted by scores of gunshots.

Witnesses said as the partiers were having fun, two groups of armed people showed up on each side of the park.

Both groups began firing at eachother, witnesses said, with the party-goers caught in the middle, forced to run for their lives.

Police arrived and began searching the park for evidence.

Zach Bain was a witness, “there were probably ten at least guns going off,” he said, estimating that he heard between 70 and 100 shots.

His friend Nick Rosario also watched in horror. He said, “kids should not be caught in the crossfire there is nothing that a kid should witness like that especially in St. Louis.”